One to Watch: WT Ca-Pow!

By Esther Hahn for  Noelle Floyd. 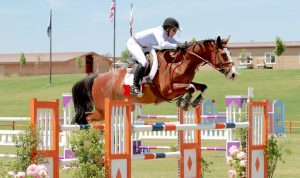 Porter and Ca-Pow! at the Central California Classic. Ph. via West Palms Events

The American breeding program at Wild Turkey Farm, outside of Portland, Oregon, has slowly and carefully grown its international presence over the years. Founder Barbara Ellison first began standing stallions in the 1990s in Northern California, mostly by happenstance, and partnered with USA’s Mandy Porter at the start of 2000 to campaign the competition horses.

The most notable horses in those formative years include Summer, a 1995 Belgian Warmblood mare (Capital x Lys de Darmen) purchased from Norman Dello Joio, and LioCalyon, a 1992 Holsteiner stallion (Liostro x Calypso II). The former made two FEI World Cup Final appearances for Team USA with Porter in the irons, and the latter found success in the International Ring at Spruce Meadows at the height of his competitive career, also with Porter.

But after Wild Turkey’s move to the Pacific Northwest region in 2011, Porter and Ellison parted ways for a number of years—in part because of the two states separating the rider and trainer from the new facilities (Porter is based in Southern California) and Ellison’s decision to hire an on-site professional. Then at the start of the 2016 season, Porter, a three-time FEI World Cup Final competitor, re-partnered with Ellison and began to campaign two of Wild Turkey’s most promising young horses, WT Ca-Pow! and WT Leapfrog.

A couple years older than his stablemate, Ca-Pow! is a 2009 Holsteiner gelding (Chesapeake x Calato).

“When he was born, the brown spot on his face was more surrounded by white, and the name was [Wild Turkey Farm manager and trainer Kelli Johnston’s] idea,” said Ellison. “And I wanted the exclamation mark to add emphasis—like when you see the word used in cartoons.”

Ca-Pow! spent his early years growing up on the idyllic farm. His athletic abilities were noticed at a young age, when he managed to run the legs off of his pasture mates—even the horses twice his age, according to Johnston.

At the age of two-and-a-half years, he was started under saddle at Colts Unlimited in Wyoming. He then returned to Oregon for a few years before joining Porter’s string at her home operations in Encinitas, Calif., in January, two weeks in advance of HITS Thermal Desert Circuit.

“At that point, he had got the Cliffs Notes, but he hadn’t read the whole book,” said Porter in regards to the gelding’s understanding of show jumping. “During Thermal, we did the 1.10m and the 1.20m the first few weeks and moved up to the the 1.30m, seven-year-olds by week four.”

By the final week of the eight-week circuit, Ca-Pow! had found his legs in the division to finish as the second half’s division champion. 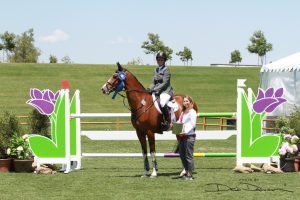 “His story’s cool, I think, because I rode his dad, Chesapeake,” said Porter, who recorded top 10 finishes with the stallion at the FEI level in 2010. “I also rode his mom, Ultima V. She’s still showing with a junior.

“There are a lot of similar traits with his father, but he has more of a calm nature from his mother. His jumping technique is very much his father and his temperament is from Ultima. He’s a big puppy dog, he’s very intelligent, a super-fast learner, and he tries very hard. Sometimes he tries to think too far ahead of you—that’s a little bit of his daddy, when the wheels get turning.”

“I think Ca-Pow! adores Mandy,” said Ellison. “I’ve worked with her since 2002, and I’m really glad we’re back as a team again. Both Ca-Pow! and Leapfrog are blossoming with her, and I’m sending her two of my other stallions to compete, as well.”

At the end of May, and into the start of June, Porter and Ca-Pow! continued their winning ways at the Paso Robles Horse Park in Central California, where they claimed victory in the first week’s Seven-Year-Old Jumper Classic, beating the rest of the jump-off field by three seconds. By the next week, the pair tested the 1.35m waters, and the young horse rose to the occasion with just a single rail.

“I see him being a grand prix horse and with the potential to be as good as his father,” said Porter. “He’s a big, outdoor horse and was excellent in Del Mar last month. Some horses can be a little spooky and backed off, but he didn’t do that at all. We haven’t yet found the venue that he doesn’t really care for—he’s been consistent wherever he’s gone.”

When at home, Ca-Pow!’s routine includes going on the walker every day and a lot of flatwork and gymnastics to work on his technique.

“I prefer gymnastic lines with poles on the ground more than jumping courses at home,” said Porter. “He also loves to trail ride. We don’t have a treadmill, but we have a trail that has hills and we regularly do that. It’s a working trail ride.”

“I do like how smart he is,” she added. “He’s super intelligent and really wants to please you. I like to teach him stuff, but I also let my horses express themselves as well. I’m not super strict. It’s a tight program, but it’s not pure dominance and it’s not rigid. Part of that is that the horse has to express himself and feel like he’s a big shot to perform at a high level.”

By early fall, Porter and Ca-Pow! will compete in the Young Jumper Championship Western League Finals and begin to step into some 1.40m classes. There’s hope that the horse will eventually advance to the FEI level. But for Porter, it’s one day, one class, one jump at a time.